Trying to understand the diff between being needed & wanted?

Do I respond better/different when I wanted v. needed? 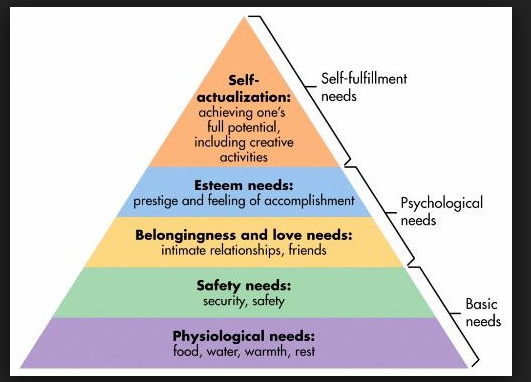 Need is something that you must have to live, (look up Maslow’s hierarchy of needs). Want is just that, you don’t need it to live but you want it in your life. Personally, I think the latter is more profound.

TY for the ref…will look it up

I want to be wanted as much as needed. Sometimes when it is good a want because a need. Desire on fire. Intimacy of mind and body is the ultimate closeness. It becomes a craving and a need. I still crave the evenness of his breath as I laid my head on his chest and the baritone voice that calmed me down on the worst day. I think often about our silliest moments where he looked like a boy with his big goofy grin. I miss how he used to look at me like I was the most beautiful woman in the world. The way he placed his hand on the small of my back when we would enter a room and the way he wrapped his arm around me and tucked me closer at night. And I will never forget the playful way he would grab my butt as I made his favorite meal or the sweetest kiss on my forehead after a long night because I needed extra sleep. When you love someone like that your want is a need. We both loved each other like that once long ago. I miss being needed and wanted like that.

a want “becomes” a need.

sorry for the typo!

and I miss doing that for someone.
Sadly I am not sure if that type of emotional intimacy is there for me anymore.
Don’t know if I can muster up the emotional strength to give someone that.
I take that back I did…but she rejected me for reasons that only she really knows.
So know I feel like I don’t want to put that effort into another again.

Agreed, there’s a transition that want can become need if you choose it to…but it’s a choice. Just like all the other variables in life, they happen by choice. I want to find someone that I can trust and love again, but I don’t need it. Life is multifaceted and when you enjoy the other aspects as much as the want of a relationship, it doesn’t burn so badly.

I just don’t believe we are meant to be alone. But there are SO MANY broken women out there,that when we meet them, we are behind the 8-ball already. Not given a fair chance I feel.

p1955-
I would agree, we aren’t meant to be alone. And it is true, there are a whole lot of broken women out there, unfortunately. And unfortunately, it was a horrible situation that broke us. That doesn’t mean that all men are the problem and a mature woman knows that. But, despite the knowledge, it is hard for us to blindly be led into any sort of relationship again. We are cautious - a bit gun shy- more protective of ourselves- and unwilling to give up every bit of ourselves like we were capable of beforehand. The thing is some women and men have been through such traumatic events that they are never the same afterward. It isn’t their fault they are frustrated with who they have become they still wish they could find the “man” that loves them despite it. They still pray for someone that will help them learn to trust him if not anyone else. Patience and understanding diligence and empathy all play a role for us. And if that guy also is steadfast on our love despite our best efforts toward fight or flight eventually…hopefully (I pray) we would have a relationship that contradicts everything we have been through with the other.
Here is a little insight into a broken woman. I hope my honesty helps you with your situation with her and helps you to understand at least some of what she may not be willing to tell you.
I am forever changed. Scared and scarred by what I have been through. I won’t lie. Every step has been so very difficult for me. But, instead of crumbling and being a victim forever I became a survivor. As a survivor I am stronger than I ever imagined and more capable then I knew. I didn’t crumble and cave and the words " I can’t" became obsolete because “I had/have to” for my children and myself…no choice. As a survivor, I was a statistic but I am not ever going to be one again. And despite who I am now I still want to be loved and to love. I want someone to grow old with. I want someone to be understanding and gentle yet tough enough to protect us with me. I don’t need a hero because I am my own hero but if I find a man that loves me despite everything and he puts in the effort… he would definitely be worth the effort to love like I once did before.

I dated a women for 3mos. I was ALL in for her. Our differences didn’t scare me away.
I wanted nothing more then to be with her…but she would at times mention stuff her EX did…they were divorced for 12+ yrs…and didn’t want that from another man. I GOT THAT.
But she felt that at times I was too pushy about stuff…like getting a kiss when we meet. To her kissing was a very personal thing and that I insisted that I get a kiss flagged me as a dominator to her!!! So after a bit she cut it off.
I was floored…cause she came back to me after about 3 dates and called it off.
SO DUMB ME…I believe what she told me about wanting us to try again.

She was the only one I’ve dated that I was more then ready to spend the remaining time of my life with.